We celebrate the birth of a new life as a society, however we fear death and the loss of life.  Could it be because we understand what it is to be alive and have only vague images of an afterlife?  With the advancement of science in the medical community we are all living longer and with a great deal of ailments that need management and medications.  In many ways, those of us who have been seriously ill have experienced an awakening and understand how fragile our mortality is.  It has been my experience that as we mature and understand that death is a certainty, we become less intimidated by the thought of the Grim Reaper.  In some circumstances, we may even welcome our own passing.  I believe in celebrating every day of life as if you will never see another sunrise.  Make the most of the here and now.  Fearing the Grim Reaper will only create stress because we do not have the power to control the time of our death.

However,  a brush with the Grim Reaper can add energy to creativity.  This mystical image of the end of life known as the Grim Reaper often helps individuals who avoid  a brush with death develop a greater joy and appreciation for life.  This experience can heighten awareness and add fuel to all forms of creativity and enhance spiritual growth. 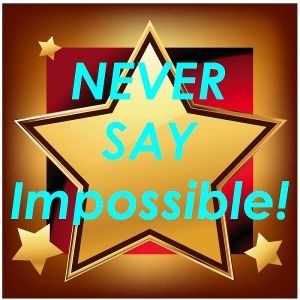 Today on Never Say Impossible Radio an author visits us with a deep faith in God.  He had a close call with his own mortality this year and has emerged as a stronger person. He has gained  a great deal of clarity about life and mortality which has served as an  inspiration in his work as a writer.  Terry Palmer faced serious heart issues and surgeries.  He was hospitalized and very ill for several months. He proudly claims that he embraced his health challenge as a blessing.  He was able to finish the writing of book two in the Chronicles of Orm series – Birth and Rejection, and start book three – A New Frontier.

Terry says, “ It’s exciting stuff because they both pit the forces of the light against impossible odds of the darkness. One of the lessons I had to learn before, during, and after my heart surgery, is with God on our side we are never alone. I can’t imagine the fear and frustration of going through this without God as my guide.”

Terry’s writing reflects his philosophy and comforts many struggling people who are overwhelmed by darkness.  He is interested in helping others  promote and grow their businesses.  For example, Terry recently added 14 article eBooks to Amazon Kindle as a demo for ‘how to’ make an old proverb relevant in todays market.  If your brand or message is having trouble staying relevant to the market, take a look at the examples and see how a change of definition might help you.

His interest is in developing Imagery into a sellable platform and getting the six book series, Chronicles of Orm to market.  By developing Chronicles of Orm into a brand that sells, he will use the basis of the script – overcoming adversity to help people not give up even though the tide may be strong.  If you’re short of faith and need a push, then this new series is for youTerry’s :