Independence for people with disabilities

Dancing On Our Disabilities Radio interviews

The Center  for Independent Living Broward

Independence and freedom are birthrights and often taken for granted by able bodied citizens.  People living with disabilities expect the very same freedom.  We want and desire independence just like everyone else. 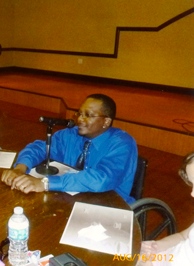 Director of Programs at CIL Broward

Brian Johnson believes that all people deserve to create their lives as they wish, with dignity, independence, and financial stability.  As the Program Director of the Center for Independent Living Broward he proudly recites the center’s mission, ” to offer assistance to people with disabilities in fulfilling their goals of independence and self sufficiency.”  Brian is wheelchair-bound, but is a proud and strong man moving around with complete independence.  He has  chosen to live his life in this manner and works tirelessly in the community to improve the lives of others struggling to overcome adversity and find independence.  The Center for Independent Living Broward offers assistive equipment, training, legal advice, support and advocacy within the community.  CIL is a National  Non-Profit  Organization with satellite offices throughout the United States.

Camille Wallace is The Director of Grants and Legal Services.  Camille is a lawyer committed to advocacy for people with disabilities.  Often people with challenges do not totally understand their legal rights.  When discrimination happens, if an individual is unaware of the legal protection which exist under amendements made to The Rehabilitation Act and through The Americans with Disabilities Act, they can be victimized.  Ms. Wallace is responsible for procurement of diversified funding sources in support of the Center for Independent Living Broward.  As a lawyer, Camille is well-informed regarding grants and legal services.  Her many years of work with the disabled community while at Disability Rights Florida makes her highly qualified to serve and assist people with disabilities in need of legal advice and advocacy.

Dancing On Our Disabilities Radio is delighted to have Brian Johnson and Camille Wallace visiting to share their philosophy about life and to shed light on the operations of CIL  Broward.

A little history about the  Americans with Disabilities act of 1990.  Most citizens know that this  country was founded in 1776 and The Declaration of independence was formed.  However it took 13 years  after that for the  first 10 amendments to be written by our founding fathers.  They named it the Bill of Rights.  The way our government operates is based on our Constitution and the Bill of Rights.  In 1973, The Rehabilitation Act was passed, which prohibited discrimination based on disability in programs conducted by federal agencies, and in employment practices of federal contractors.

However, very few people know that it took 214 years after this nation was formed for legislature to be passed protecting the rights of people with disabilities on various fronts.  This 14th amendment to the Constitution is called the Americans with Disabilities Act.  Adopting new amendments takes the involvement of Congress, the President,  and the Supreme Court.  It  has been 25 years since the ADA was passed and it has definitely made a difference to protect the rights of people living with challenges.  We now have access to public buildings, restaurants, restrooms, special provisions in schools, housing, transportation, and legal rights protecting  people with disabilities from being discriminated against.  However, it has done very little to expand employment opportunities for people with disabilities until now.  Unemployment rates remained shockingly high for people with disabilities compared to the able-bodied community.  Why?  Perhaps because of negative social stigmas, fear on the part of potential employers, lack of education regarding the talents and abilities of people with challenges, as well as a whole host of other reasons.

It is time to celebrate because in March 2014 the US Department of Labor made adjustments to the Rehabilitation Act of 1973  by implementing changes to Section 503 which prohibited federal contractors and subcontractors from discriminating against employing people with disabilities.  The mandate requires federal contractors and employers to take affirmative action to recruit, hire, promote, and retain  these individuals.  Wow, what an amazing  giant step forward.  We have not won the war yet and we have only begun the battle.  The playing field is beginning to level and people with disabilities can see a light at the end of the tunnel.  Independence for people with disabilities is growing every day. The future is looking bright and opportunities are expanding.

Brian Johnson has been involved in the advocacy field for the last 16 years providing assistance to individuals with disabilities who are trying to become more independent in their community and access services that they are entitled to, and may not even be aware exist.  He has served as a volunteer surrogate parent for foster children with disabilities,  conducts independent living assessments,  training in independent living skills, assistive technology, employment assistance, housing assistance, and advocacy ADA and IDEA.

Brian is a person with a disability caused by spinal cord injury.  He has a Bachelors Degree in Education and Philosophy from the University of Miami.  He has been married for the last 10 years to his high school sweetheart, whom he has been with for over 20 years.  He is the proud father of two young children a four-year-old son and a 22 month- old daughter, and views his family as his greatest accomplishment.

Camille Wallace joined the Center for Independent Living of Broward CILB in 2013. Ms. Wallace serves on the Executive Team as the Director of Grants and Legal Services. Prior to working at the CILB, Camille was appointed District Court Commissioner in the State of Maryland Prince Georges County Criminal and Civil District Court Division. Her commitment to advocacy for people with disabilities began when she joined Disability Rights Florida. While at Disability Rights Florida, Camille managed the team responsible for providing individual and systemic advocacy for individuals in institutional settings and recipients of Medicaid Waiver benefits and provided legal guidance for vocational rehabilitation clients. She worked on behalf of Disability Rights Florida on the Governor’s Commission on Disabilities and served as lead staff on issues affecting youth with disabilities in foster care. In 2009, Camille was appointed to the Florida Rehabilitation Council (FRC). Before joining Disability Rights Florida, Camille’s passion for service blossomed throughout her legal career. As a volunteer attorney, Camille educated ex-felons on restoration of their civil rights. She sought the right for children to receive child support as a Prosecutor with the Miami-Dada State Attorney’s Office. For more than four years, she advocated for the welfare and safety of abused, neglected, and abandoned children as an Assistant Attorney General in the District of Columbia , a Special Public Defender, and Department of Children and Families Attorney. Camille received her B.A. from Ohio State University, J.D. from Nova Southeastern University, and Master’s of Public Administration  from Walden University. She is a member of the Florida Bar, District of Columbia Bar, and admitted to practice in the United States Southern District of Florida, and the United States Middle District of Florida.