MUSIC THAT WILL MAKE YOU FEEL HAPPY

MUSIC THAT WILL TAKE YOU TO ANOTHER PLACE AND TIME

ONE PLUS ONE BAND

George and Marion Frega are musically and professionally known as One Plus One. A musical union and a love story all wrapped up in one. Their style includes Big Band, Rock and Roll, Disco, and rock standards right up to today’s hits. They make you want to jump out of your seat and shout and when they preform everyone has fun. They have brought down the house at numerous corporate conventions, clubs & private parties. Their music went international when they had the coveted distinction of being the only American duo chosen to perform on the RMS QE2 while under Japanese charter. That distinction led to multiple contracts with other cruise lines such as Carnival, Princess, Crystal and an around the world trip on the Royal Viking Sun.

get a loan online now

Individually & collectively George and Marion Frega have shared the stage with such oldies acts as The Platters, Joey Dee and the Starlighters, the Brooklyn Bridge, the Five Satins and other stars such as Jack Jones, Vic Damone, Barry Manilow, Howie Mandel and Clint Holmes. One of the highlights of their career was performing for His Serene Highness Prince Rainer and Prince Albert of Monaco, who at the time were vacationing in Florida.

“One Plus One” Is an amazing union of spirit, body and mind, Marian and George are married and are a beautiful love story. 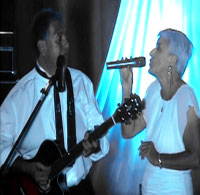